Non-Alcohol Category Thriving in the U.S. as Sales Increase 40+ Percent in 2020

STRATFORD, CT (September 11, 2020) – Athletic Brewing Company, the first solely non-alcohol craft brewery in the U.S., announced today that it has expanded its distribution to Colorado this month. Athletic Brewing, which brews at its facilities in Stratford, CT and San Diego, CA, delivers great-tasting, all-natural, low-calorie beers that just happen to be non-alcoholic. When Athletic debuted in 2018, Athletic was the first new release in the segment in decades.

Athletic beers are an ideal fit for modern adults who are drinking less alcohol and demand high performance in all elements of their life. Using a revolutionary and proprietary process to brew its craft non-alcoholic beers, Athletic is redefining the category, which, year-to-date, is up 40.7 percent, to $64.7 million. Athletic Brewing’s sales increased more than 1,000 percent and to more than 10,000 barrels in 2019. The company’s recent West Coast brewery launch added an additional 125,000 barrels in capacity.

“Removing the alcohol can help beer lovers avoid the calories, dehydration and sleep deprivation associated with drinking. The alcohol content also traditionally limits beer consumption to certain occasions – the cookout, the ballgame, or the night out,” said Athletic Brewing co-founder Bill Shufelt. “Athletic beers aren’t defined by occasion. Athletic beers are for weeknights when you want to be ready for work the next morning, for the athlete who is training for the 10k, the half or more; for the parent who has children in tow; or when you want to have good times with friends and family but feel great the next day.”

Research has confirmed that non-alcoholic beer is rich in electrolytes, potassium, Vitamin B, Vitamin D, Calcium, and other minerals. Scientific research conducted over the past decade has determined that non-alcoholic beer has significant antioxidant, antipathogenic, and anti-inflammatory properties that help marathon runners reduce inflammation and incidences of transient immune dysfunction.

“Athletic Brewing is on a mission to make the beers that we, as craft beer lovers, want to drink. We are consistently delivering quality and innovation in our non-alcoholic craft beers to meet the demands of modern life,” said Shufelt.  “Since we brewed our first can, we said ‘Brew Without

Compromise’ – we proudly make great tasting, low calorie and non-alcoholic beer that stands shoulder-to-shoulder with any top alcoholic beer in quality and taste.”

Athletic Brewing proudly donates two percent of all sales to trail and park cleanups through their “Two for the Trails” program and expects to contribute more than $150,000 to trails across the nation this year..

“We know that brewing awesome non-alcoholic beer that allows beer drinkers to live a healthy and active lifestyle isn’t the only way our team can make a positive impact in people’s lives,” said Shufelt. “With Two for Trails we think we can make a broader impact.”

We’re beer lovers at heart. But we also love being healthy, active, and at our best. These conflicting passions created an internal struggle. Why couldn’t these loves live in harmony? Yes, there was non-alcoholic beer – but we’re lovers of great tasting beer. Maybe it just wasn’t possible, but we had to give it a try. A few years and hundreds of recipes later, Athletic Brewing Company was born – the first brewery fully devoted to the production of non-alcoholic craft beer in the US. We craft our innovative recipes using only pure, all-natural ingredients in small batches at our custom breweries on the East and West Coasts. Our intricate process lets you enjoy the refreshing taste of craft beer without the alcohol… So whether you’ve decided to cut alcohol out of your life for good, for a night, or for just one drink, Athletic Brewing Company provides an option without compromises.

Run Wild is the ultimate sessionable IPA for craft beer lovers. Brewed with a blend of five Northwest hops, it has an approachable bitterness to balance the specialty malt body. Always refreshing and only 70 calories. 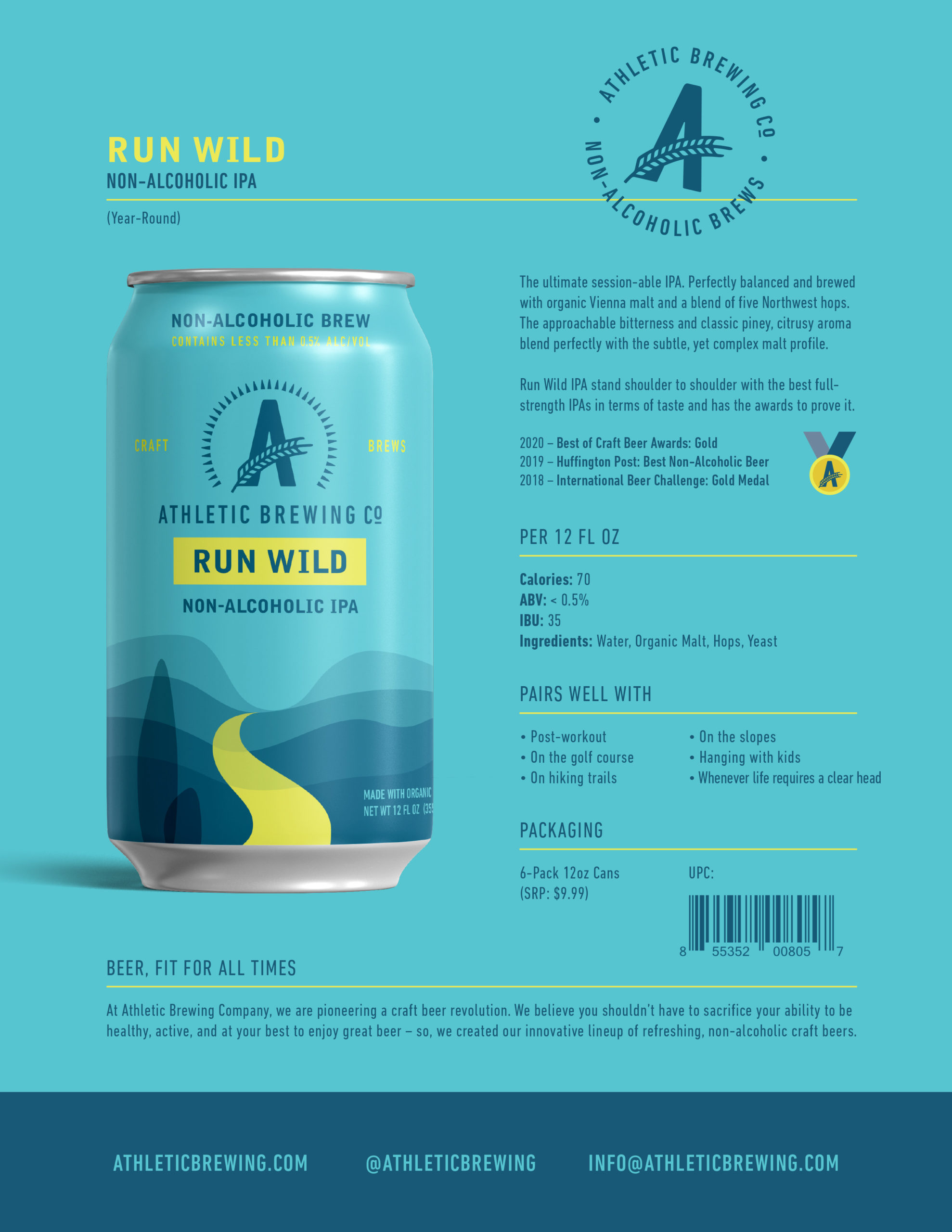 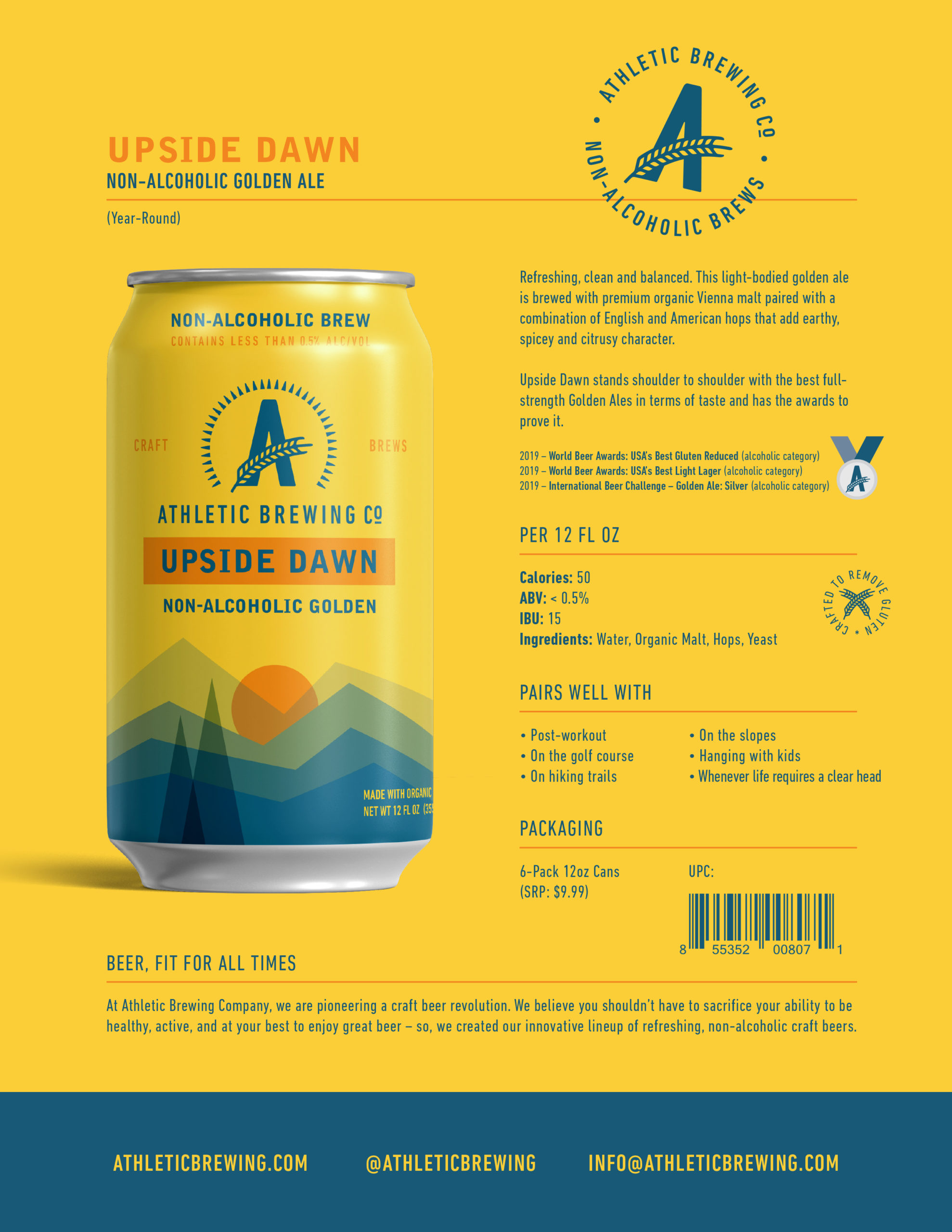 Crush a Can with Telluride Brewing

Interview with: Charlie Ingram Telluride Brewing Co, Director of Sales Q: Tell us how the “Peel Before Recycling” label came about?   A: The stickers on our wrapped cans have plastic…